So I am not a massive fan of coffee (bad foodie, I know) but after Inishfood and our great tutorial I was intrigued. Well I know a lady who loves her coffee, and she recently acquired an aeropress and boy is she smitten. So she decided to write a review for me as I’m terrible at posting during exam time! So thanks Mary. Without further ado, I had her over to you:

I began drinking coffee around 9 years ago. Tim Horton’s* coffee was all I would have, and despite other people claiming it was quite poor quality, I didn’t know better.

(*Tim Horton’s is a Canadian coffee shop chain. It’s an awesome chain, and almost every Canadian loves it. But, their coffee really isn’t great.)

It took a good number of years, but I moved onto a drip coffee machine (after a period of time where I spent ~50 Euros per month on white mochas that tasted amazing… maybe it was the sugar). The drip coffee was okay, but nothing special. It got me going in the morning, and as long as it was loaded with milk and sugar, it was acceptable.

My drip coffee machine broke, so I moved onto a french press. It continued to only be okay. But there would always be a good amount of grit at the bottom, despite making sure my coffee was ground coarsely. I did not enjoy that.

I also didn’t make my french press coffee the way true coffee experts would. My beans were not freshly roasted (they were from Starbucks). They also were not freshly ground (they were ground at Starbucks and sat in a jar). I would leave it to steep far too long. But, it made coffee and it was okay.

I ran out of ground coffee, and since it was close to the end of the academic year, I didn’t feel that getting a whole new bag of coffee ground was worth it. So, I started researching. And sent Sarah out to get facts.

I wanted a grinder. But I wanted a hand grinder, because I don’t want to take my appliances that use EU plugs back to North America. In my search, I was directed to the Hario Grinder Skerton. It was cute and seemed to have good reviews. (How can one buy anything without the reviews of other consumers?)

While Sarah asked around, she was told by CoffeeAngel (@CoffeeAngel) that the grinder paired well with the Aeropress. Once again, reviews seemed very positive! Most notable was the mention that this produced an amazingly smooth coffee with no grit. No grit?!

I’m only day 2 (and 3 cups of coffee) into my ownership, but I am very impressed so far! 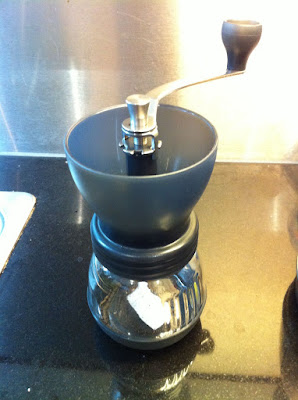 Hario Grinder Skerton: Very fun and easy to use. Can grind coffee beans into different sizes of particles. As with other reviews I’ve read, the coarse grind seems rather irregular in terms of size. But the fine grind, as appropriate for the Aeropress, is very consistent. 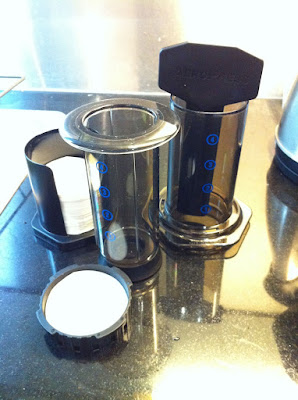 Aeropress: Amazingly, there is absolutely no grit. And it is quite delicious and smooth. So smooth that it can be consumed without milk. There is much tinkering that still much be done, as apparently this is one of the most customizable methods of coffee brewing. Clean up is very quick and easy.

Bottom line? The Aeropress is a simple and cheap machine that makes some delicious coffee. It’s not going to break the bank to try it out, but it might change how you enjoy your coffee.