Hallowe’en for me brings back a flurry of memories. From blustery nights of trick or treating in costumes that were mostly made of black bin bags with no fewer than 8 neighbours, to our kitchen table groaning under the weight of sweets, chocolate, nuts and fruit, with a healthy dose of bobbing for apples, sparklers, spooky stories and cracking nuts with a hammer because we never did get a nutcracker, Hallowe’en was one of my favourite nights of the year. Generally we’d have three to four sets of neighbours at our house. We would all go out, taking in two or three of the areas around the place. It was a long process that necessitated 2 to 3 cars, as it wasn’t possible to walk to everywhere – a down side of living in the depths of the country. We also never seem to find a pumpkin, so a turnip became our go to for a scar- no.. it never really did look scary. To give you an idea of what it was like, I’m going to share a picture of our pre trick or treating state – with my sister (baby) and ‘adopted sisters’ in this photo. 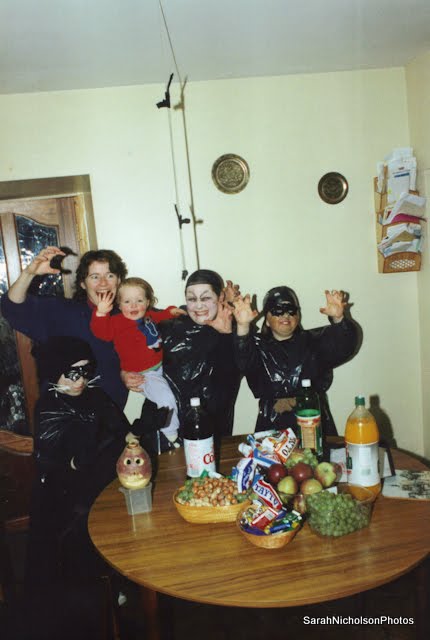 This really makes me miss being a kid. As for what we were- I believe I was a cat (black bin bag, weird mask, black face paint, tights/swim cap on head), and I have NO notion as to what the other two were, but you’ll notice the costume (black bin bag, weird mask, black/white face paint, tights/swim cap on head), and you can’t deny it is frightening! Hannah was just Hannah, which is a pretty scary picture, admittedly. In future years she was to be a witch, inspired by her idol, Sabrina the teenage witch. I think for most Irish kids growing up, this is what Hallowe’en consisted of. Black bags and terrible face paint. The odd plastic mask which inevitably tore and cut the bejaysus out of your hands, with elastic catching in your hair. Life was good. And very simple. And not very fashion conscious. Tricks didn’t really happen so much, although later I discovered that red food colouring in fairy liquid and dripped all over the door and doorbell makes a really good slimy blood like substance to freak some youngsters out (it is Hallowe’en after all). I also discovered candles, and that didn’t work out so well for the old tv that went on fire, but that’s a story for another day. I think I’d give anything to go back and get some of the antics on video!

When we got back from relieving all neighbours of ridiculous amounts of chocolate (and the odd apple, raging), we would ceremoniously upend our plastic bags on the table, and cause our respective parents faces to crumple as they would mentally begin totting up the dentist’s bills after this escapade. After an obscene amount was gobbled – seconds it took, seconds – we would launch into the games. The old apple on a string game was the first up- I don’t really know why this game was so entertaining then, but God help us we just loved it. Then to the apple/money bobbing. Everyone went for the money of course- a 50p piece being the grand prize. What made it harder were the thousands (or so it seemed) of monkey nuts (peanuts in shells), floating around. Ironically, the apples were promptly ignored by all. A few years running, we also called to another neighbours house early in the evening. One of their games involved a bucketful of flour being turned upside down, everybody taking slices out of it with a knife, and the poor person who knocked it would get their face dunked into it. Very suited to hallowe’en, very ghostly indeed when you came away. But back to our house, where we would retire to a candlelit living room to tell horror stories. Rebecca, a neighbour, would generally be the victim of an annual prank where Dad would leave under pretences of getting more food (believable, after all), go out the back door and sneak round to the patio door, which would have been pre-opened and curtains drawn in front of it. I don’t know how she fell for it every year, or why she sat in the couch with her back to the patio door, but as I lauched into my usual horror stories, told in a low and shaky voice, she would gradually get more and more terrified, edging up on the couch to a crouching position and gripping the arm of the poor person beside her, until, right before the big ending, the scariest bit of the story, Dad would burst out from behind the curtain with an almighty roar, and she (and most of the other kids and adults) would screech and leap off the couch and to the other side of the room. At which point I would be rolling around on the ground laughing, as would Rebecca as soon as she got over the initial shock. She generally threw a good few punches at Richie to get him back.

Post horror stories, the tea would come out – let’s not forget, this is Ireland after all, and with tea came a barmbrack, or tea brack. I’ll confess, I was never a fan of it, except for… the ring. (Insert LOTR music here)

Traditionally a barmbrack is baked with a ring (and some other bits and pieces) in it. If you get a ring (the ultimate Hallowe’en prize for a youngster), it signifies marriage within the year. Given that we were all under the age if 15 or else married, it seems a bit unlikely, but tradition and whatnot. Apparently myself and Peter were married at some point anyway in a delightful ceremony up a mountain, so perhaps tis true. Dad would cut the brack, and each person called their slice before he cut it, so that whoever’s slice it was got the ring if he hit gold, as it were! They were generally pretty poor affairs – a plain silver (not real) band etc, the odd one would have those thin gold (definitely not real) bands with a ‘diamond’ on it – Jackpot. However, we rarely made our own brack, which I always thought was a shame. So the last few years I’ve been making it, putting an old or cheap ring in it because you can’t bake one without, of course.

I found there were a lack of good recipes around on the old interwebs though, and tried a few which led to the ultimate hallowe’en horror of a dry brack, as they say. So I found this tea brack recipe on the odlums website, and it’s an immediate hit with my family. It is quite a wet brack, so bear that in mind. It also cooks pretty slowly, and I would definitely recommend keeping some baking paper over the top for the first 40 minutes, but I was pretty happy with the result. Nobody has found the ring yet! Oh the suspense. 1. This takes planning ahead, as you need to soak the fruit in the tea in a large bowl overnight, or for at least 6 hours.
2. Preheat your oven to 180 degrees (160 in a fan oven).
3. Grease and line a round baking tin. I use an 8″.
4. Take your fruit mixture, add your egg & sugar to the bowl
5. Sift in your flour and mixed spice
6. Mix gently until combined. You don’t want your fruit to break up too much, so take it easy on it!
7. Pour into your tin, and add your well wrapped ring. You may want to also add a coin wrapped in some foil or paper (signifies wealth), I think I’m in desperate need of it!
8. Bake for approximately 1 hour. Mine took 1 hour 10 mins until fully done. If in doubt, test your cake with a skewer, and make sure it comes out reasonably clean and without batter.
8. Leave in the tin for about 10 minutes, then remove and cool on a wire tray. This brack keeps well in an airtight container for a few days. It probably won’t last that long though.

I miss old school Hallowe’en, but glad I have the vivid and hilarious memories of some good years gone by! Have you any good Hallowe’en customs or stories you’d like to share? Were things very different in your house? Please do share below in a comment!

3 thoughts on “Irish food: Hallowe’en is approaching, here’s to the traditional Irish Barmbrack”