Jennifer is my cousin. She was born that way, she couldn’t help it, poor girl. We spent a lot of time together growing up, whether we liked it or not, for my mother’s family are all quite close. Quite a lot of our time was spent running like mad eejits through homemade obstacle courses- when Mammy CITC discovered that she could buy medals in town, these became the high end, low budgt community games. Mainly because I couldn’t win anything at the actual community games. Well, I did win bronze (I use that term lightly) once in swimming. I came third. Out of three. Still, I got a medal which sits proudly in the back of a press somewhere. But I digress.

Well the whole point was, really, that we all grew up together- Jennifer, Jason, Hannah and I, all being of similar ages. We tended to be thrown together every time one of our respective families had had enough of us and ran off on a holiday without us. These trips mostly involved mandatory shows held in Granny’s house which would of course be unavoidable for parents, and tickets for which would cost a minimum of 2 pounds per person. Except for Granny, whose wardrobes and house were raided for props and costumes, and so earned herself a VIP seat and a personal assistant should she want a drink throughout the performance. The show would begin promptly at 2pm, starting of course with the youngest- Hannah, who would silence the audience with an emotional rendition of ‘Cats sleep anywhere’. Not a dry eye in the house as she held herself together long enough to utter the last line of the well known poem.. ‘Cats.. sleep… anywhere’. This would be followed by Jason, sometimes with Jennifer’s help, as he recited something about football, played football, or produced a football from a top hat- you get the gist here. Jennifer would then captivate the audience with another of the poems learned in drama, and I would follow in the same thread. After this would come the matinee, at which homemade foodstuffs could be purchased at exorbitant prices from a vendor (me). Foodstuffs available would largely consist of Granny’s collection of sweets, an attempt at home baking which would have taken place without the aid of a weighing scales (written on the programme was clear warning that consumption was at the risk of the purchaser), but with some help from the weighing scales in Granny’s post office. This was one of those old affairs with a balance and weights that would dictate the cost of a parcel. And yes, my Granny had a post office in her house, and worked there until her 80’s or so, but now has retired! Well using this weighing balance apparatus we managed to put together some kind of recipe that made something akin to marla (plasticine to non irish) and with a healthy dose of bits of red wax that got mixed up in the flour during the weighing process, with the odd stamp floating around in the mixture. It was like a lucky dip really, when you think about it.

But then the masterpiece. Three days and hours of practice would have resulted in the formulation, direction and eventually production of an original and highly secret script. For the life of me, I can’t remember what even one of these were about, but I assume something akin to a Tony award winning performance, the likes of which could never again be matched, thus the need to completely block it out of our memories, so as to have a chance at enjoying life, and so forth. But regardless, when we took our bow at the end of the production, the parents would promptly wake back up, cheer and clap with some fervour and in an emotional state (probably something to do with the fact they had lost 2 hours and the guts of five pounds each) give us a standing ovation. It was probably cheap realistically, I assume one has to produce at least an iPad or laptop, or a minimum of a 32″ 3D TV as payment for contemporary shows that one’s children put on. 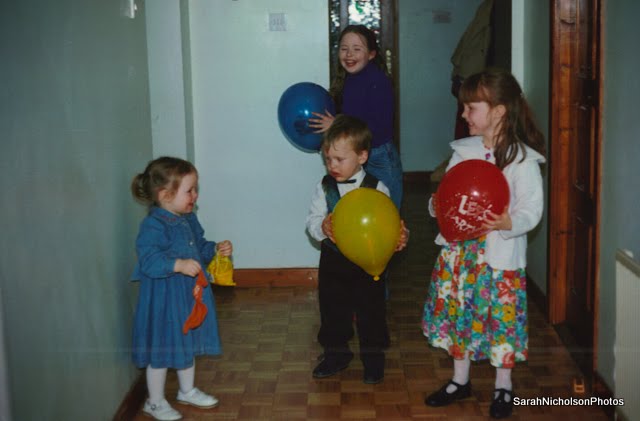 Hannah, Jason, Jennifer and me at the back, rehearsing for a masterpiece! Hannah just burst a balloon

Anyway, what started off this whole thing was the fact that Jennifer’s birthday is coming up, and while she is stuck at the airport for most of it, booo, I had to make her something nice. And given that the girl is slightly obsessed with all things peanut butter, what better way than to produce her very own supply of peanut butter sweeties. I made two kinds and trialled them at work, and both went down a treat. The first I made were the homemade version of peanut butter cups- which were actually quite doable really, and which look fabulous. I used a mold I got for about 1.99 in homestore and more (be still my beating heart), and some sweet cases, but really you could just use anything- bun cases etc. This would easily make about 30-40 small cups/sweets 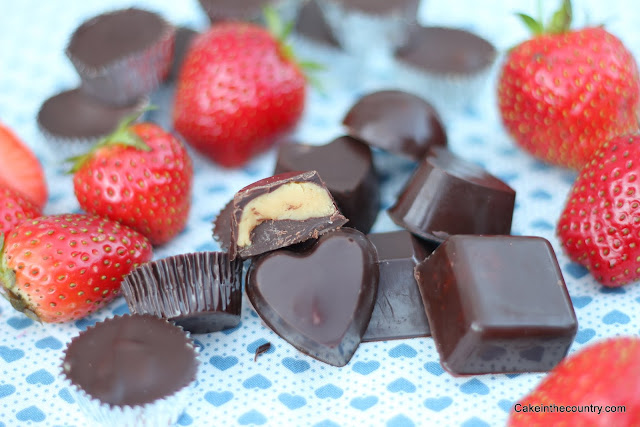 What to do
1. Melt your chocolate in a heatproof bowl over simmering water.
2. Stir in your butter when melted.
3. Using a pastry brush, brush your melted chocolate into your mold or cases. You may want to let each coat set and give another coat so that the chocolate is of a good thickness. Use about half of your chocolate.
4. Leave to set. Keep your leftover chocolate warm

5. Put your peanut butter, butter and icing sugar together in a bowl. You can either microwave this for about a minute on med high, or set it over your water (which is what I did) and give it a good whisk together when everything is softening up. That’s basically it!

6. So when your chocolate is set, you’re going to drop spoonfuls of your peanut butter mix in your pre-chocolatised cases. This is usually warmish so having a good chocolate base is a good idea. Again, leave this to set in a cool place. leave a bit of space for your covering of chocolate if you’re using a mold or cup.

7. When the mixture is cool and somewhat set, you can use the rest of your chocolate to cover your cups. Then we leave them to set for the last time before tucking in!

I kept these in the fridge – It’s not the best for the chocolate but I wanted to be on the safe side with the butter. They last at least a week (but only if you hide them from your family).